Three months ago we lost our beautiful dog. Here's my tribute:

Maya – our energetic bundle of apricot-gold goodness. Pure love with an attitude when she didn’t quite get her way although that never happened too often. We were softies and our goldendoodle knew it. How she loved it when we’d rub her belly, when I’d gently stroke the sides of her face. That sweet sigh of satisfaction she’d emit. How she loved to “play rough” with Volodya, giving no ground in their tug of war battle, her tail swinging from side to side. 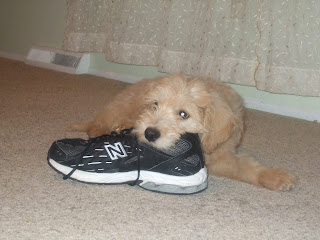 On the few occasions she didn’t get what she wanted immediately, there was that little grunt she’d make of dissatisfaction, but then she’d come over and with a swish of her tail, lie down nearby and put her head on her paws. She loved to be near us wherever we were – on the couch, on the bed, in the kitchen. She’d squeeze her 70-pound body under the small kitchen table as we ate, sometimes so silent I’d forget she was there. Of course, she was aptly rewarded, more often by Volodya than me, but I couldn’t resist her pleading brown eyes either. Feed me, they said. 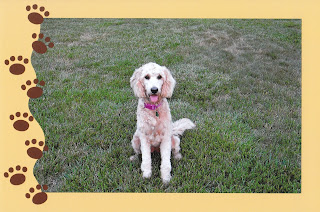 Linochka was often her accomplice and took great pleasure in throwing her the discarded food she didn’t feel like eating. She usually was careful to do it when Volodya and I were distracted or out of the room. Maya would hover near her, knowing she’d soon be rewarded. From time to time, Lina would like putting her feet on Maya’s soft fur and the two of them would lie there quietly in an understood silence and sense of camaraderie.

Maya was the one who’d alert us to the arrival of the school bus in the mornings. She’d walk over to the bathroom where Lina would still be brushing her teeth while I supervised, and stand there looking up at us, letting us know to get moving faster. In the afternoons, she‘d like it when I’d open the front door and she got to observe Chalfonte street in all its glory. Trilevels and an occasional ranch house dot our quiet subdivision and many dogs reside here. Any child walking by or truck slowing down would get her barking, but as Maya grew older, she mellowed out and simply observed the surroundings from our cul de sac. She had this deep alto bark that easily distinguished her from all the other dogs in our neighborhood. In some ways it resembled a croaking frog. 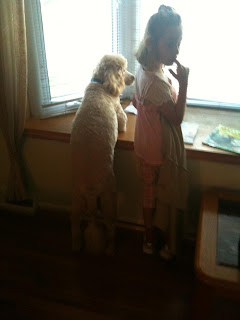 These days, our house feels different, empty and morose, even when all three of us are there. Her bowls and dog bed have been put away and we realize how much this place was her domain. Her spirit resides here and it’s where I sense her the most, inches from my feet. That’s where she appeared to me in my dream, two nights after her soul passed. She was lying snuggled at my feet, as she’d done countless times over the years. In the dream I was asleep on our bed with her and Lina while Volodya was still in Kyiv, visiting his mom and brother. Maya started growling in the dream and I opened my eyes, noticing that one of our windows was open. But this window was decidedly more ornate and immense, resembling a window in a castle. Just then the sound of unfamiliar voices wafted into the room. It seemed as if a group of people had gathered outside our house. I was stunned, wondering who they were and what they wanted. I knew I had to close the window as I felt the first pinpricks of fear. That’s when the window started opening by itself even wider and the voices grew louder. Maya stayed next to me and kept growling. Just as I started to get up, I awoke from my dream.

Later my friend Dorene pulled out her dream cards and wrote that the window and castle suggest an exit to an otherworldly realm. When she looked up window, the Opening card came up: Sometimes simply letting events happen as they will sets the stage for new intentions. Allow things to happen in your life, following where they lead you. In contrast, looking up castle produced the Protecting card: To protect is to preserve our essential nature against what would destroy it.

I’ve loved dogs since I was a kid. Although I love animals in general, I felt some strange kinship with them, was always happy when they came sniffing round our small lot on Mitchell Street in Hamtramck. One golden lab would regularly escape her back yard and amble down the street, settling herself near me as I’d skip rope or bounce my large polka-dotted ball against the side of the house.

Back then I’d periodically pester my mother for a dog but we lived in a small rented flat and there was no grassy back yard for a dog to even play in. One time when I renewed my request for a dog, my mother started tearing up, telling me that when she and her family fled Ukraine during World War II, their beloved Chunya had gotten separated from the family. There was no time to stop and look for her as they were literally fleeing for their lives. Later as I grew older, I learned more about the wartime horrors and losses that my family and countless others had endured but that childhood memory of my mother’s lost dog has always stayed with me.

Before Maya came along, there was Sirka. Sirka was my sister’s dog and though her whole family doted on her, my mother, brother and I considered her ours too, and were excited for any opportunity to take care of her when they were out of town. She was a gray-white mix of Siberian husky, terrier and German shepherd, and lived to the dog-ripe age of 15. Her name derives from the Ukrainian color “siriy” which means gray. Sirka was a sensitive soul, just like Maya. When she had to be alone for a while and Volodya and I would come over, she snuggled next to me, in a loud tone complaining at the injustice. I’d stroke her and agree wholeheartedly until she’d settle down. We’d take Sirka for car rides, just to watch her excitedly race from one back-seat window to the other. When she was young, we’d go for walks in the woods near my sister’s house and she’d race freely about at supersonic speed. Sirka was a rebel too but then what dog isn’t? My sister would drive up to the house and catch Sirka gazing out the front window, sitting on the forbidden front room couch. 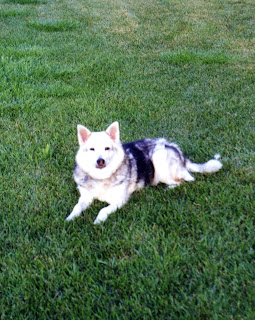 Maya, on the other hand, was anxious in the car even when Lina or I sat next to her during our annual trips up north. What she loved though was racing into the water, swimming round us at Lake Louise or Little Bear Lake, and excitedly jumping into the waves of Lake Superior the summer we visited the UP. Her joy filled us with joy and Lina would burst out laughing at her antics, following Maya’s steps through the waves near the shoreline.

Maya loved chasing the squirrels and hapless bunnies that reside in our spacious, pie-shaped yard. She also learned the hard way that running after the skunk was not the best idea. It took days to get rid of the scent from that encounter. But in everything, Maya was persistent. She’d eye the cupboard door where her snacks were kept and then look over at me numerous times wondering what a dunce I was before I’d finally cave and give her a snack. After the squirrels tired of dodging Maya, they’d run up one of the trees and Maya would sit nearby for long stretches, staring up at the limbs, waiting for them to come back down. 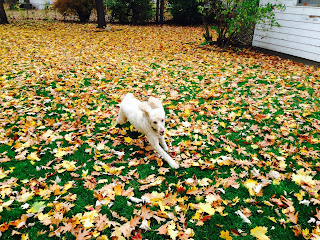 These days it’s those routines we miss most. Like when she’d curl up by our feet and put her head on our knees, sighing deeply like she just hit the jackpot. How excited she’d get when we’d pull out the leash, jumping around like a puppy even in her last days. The sweet jingle of the red heart-shaped tag on her pink collar as she’d run to greet you at the door. The prance of her step when Volodya would take her on her daily walk, sauntering past all the houses where dogs were locked inside or in the back yard, barking furiously at her. The ringing of the bell hanging near the back door when she had to go outside. At least that was the purpose of the bell. But quite often Maya would lift her paw and hit it, hoping for a snack. She became a master at ringing that
bell. 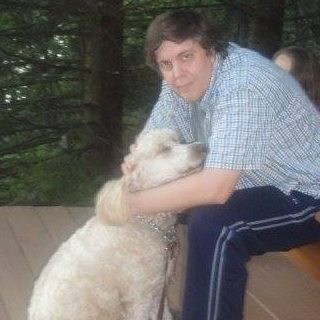 The nasal cancer diagnosis came out of nowhere shortly before Maya turned nine and a half. It was a surreal time, right around the first anniversary of my mom’s death. My mom had loved Maya just as she’d loved Sirka years earlier. She especially enjoyed seeing her fly across our yard in joyful abandon.

But in a crazy twist, the universe had a surprise for us. The day before Maya crossed the rainbow bridge, Volodya won $1,000 on a lottery ticket. It seemed unbelievable as he’d just started playing on a whim and used our birthdates. I was sure he was joking. At the time we had no idea we’d have to rush Maya to the vet hospital the very next morning, that she’d decline drastically during the night, that we’d have to come home without her, that the hospital bill would turn out to be just over the thousand we’d won.

I believe that people and animals come into our lives with a purpose. Sometimes it’s just for a little while and sometimes it’s for longer. Maya came into our lives at a time when our family needed all the love and joy that only she could bring. We had her for almost a decade and although that wasn’t nearly enough, every day proved to be a gift. 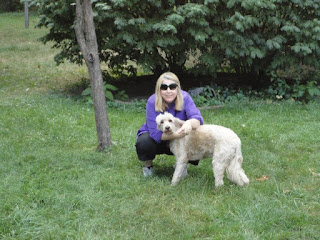 A few weeks ago as I hurried from the kitchen to the hallway, I had a vision of Maya sitting on the couch in the way she always did, her brown eyes looking steadily at me. It took a few seconds before the realization sunk in and I suddenly stopped, then turned around in an incredulous double take. Of course, the sofa was empty, not even a pile of blankets on it to resemble a small mound, much less a dog. A couple of hours later, Volodya came home to tell me he’d finally cleaned out the back seat of his car, nearly two months after Maya had laid on it in what would turn out to be her final day with us. I froze, remembering my dream. She had again sent me a sign that she was nearby.

January 6, 2013 Now that Crossing The Border is out in the world,  I’ve been asked some interesting questions about the meaning be...